“Korea has some of the BEST Internet speeds in the world!”

I don’t live in the middle of Nowhere, South Korea and I have Internet problems as much as anyone else here. Sites crash if there is too much traffic online. It takes just as long as anywhere else in the world to load your Facebook feed. I know another expat who has contacted several Internet provider companies to help her fix her Internet issues at home and none of them have been able to help her. It’s actually a running joke with my friends that whenever our Internet is not working that “Oh well, I guess my Internet was getting too fast”.

In all honesty, I’ve had better Internet connection in some cafes in other countries versus the Internet connection I get in Korean cafes. I’m pretty sure this idea that Korea has super fast Internet speeds came to fruition because of their advanced technology but it definitely isn’t anything to brag about in my opinion. 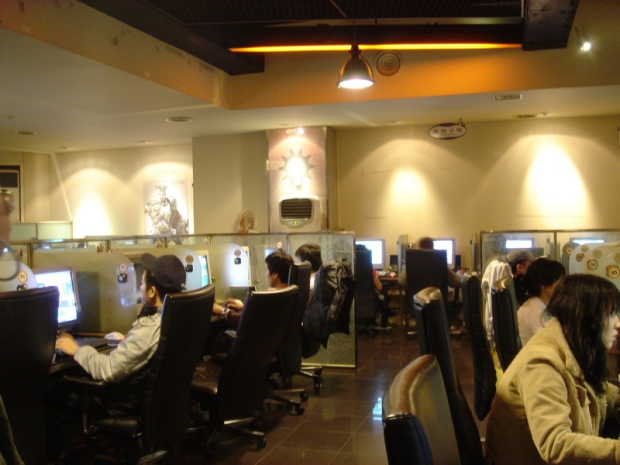 A typical PC Room; full of people at all hours of the day minding their own business. Image borrowed from here.

The solution for lackluster Internet speeds at your own home, however, can be found at the numerous PC Rooms in the country. These are rooms in buildings built specifically to give high speed Internet to online gamers and are your best bet for constant Internet without delay. Another plus: they also serve soft drinks and cup ramen in PC Rooms (some even have fancier options like smoothies or hot meals) so you can sit in a PC Room all day and never need to leave.

Even if you have League of Legends™ or Overwatch™ on your personal computer, I’d strongly recommend going to a PC Room instead of playing it at home. Internet connection is undeniable at PC Rooms when it may come and go at your home. They offer a wide variety of games to play online from League of Legends™, Overwatch™, MapleStory™ (1 & 2), StarCraft™, Player Unknown’s: Battlegrounds™, and many more.

Can I go without a cellphone plan and just bounce between Wi-Fi hot spots?

Can you recommend a cellphone plan to me then?

Personally, I carry around a device that provides Wi-Fi to any device connected to it that everyone refers to lovingly as an ‘egg’. It’s the only kind of plan I’ve had and I wouldn’t want to recommend it over a different plan because they all have their pluses and minuses. Just ask around and find what works for your lifestyle and how much data you use on a month to month basis.

“Korea has some of the BEST Internet speeds in the world!”